January 26, 2011
Caught the 10am coach to Oxford at Victoria station (left here at 9).  The coach was nice – had wifi which was a real plus, though slow.  The drive to Oxford looked like it might as well have been SW Ontario, really.  Just the homes could tell it apart.
Oxford was neat, though.
First off, I found the Ashmolean Museum close to the bus terminal.  Loads there – really neat stuff like the ‘Alfred Jewel’.  I liked the Indian and Japanese artefacts,

But I am really not that into ancient pottery, ceramics, and statues.  However, I did enjoy this boar: 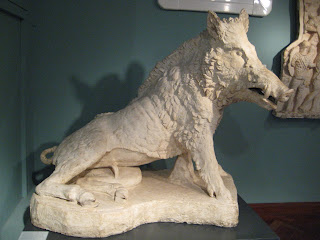 the oldest cast in the museum (1860 or so).  The precisely same statue is outside of the Modern Languages building at UW.  I, and probably the rest of the UW students, figured it to be an original work of art at Waterloo – but as it turns out it is a nod to Oxford. Well, fair enough, eh?
From there I wandered, it was cold and a tad rainy – but jus that british misty stuff that doesn’t get you wet, just cold.  I saw the Magdalena college (pron. Maudlin) and strolled across from Merton’s walk to Christ Church.  After finding hot lunch at good ole’ Prêt a Manger, I came back for a £4 admission fee and wander.  So I saw the great hall where some Harry Potter was apparently filmed: 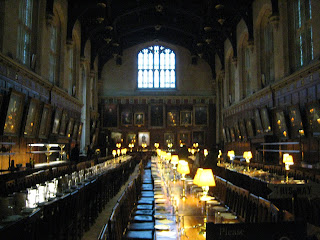 Took a picture of Lewis Carrol’s portrait there (Charles Dodgson – math prof. at Oxford) and took note of various references from Alice in Wonderland (and other books about her) at Oxford.  The Christ Church cathedral was awesome, just so ancient and remarkable. (there was an ‘Alice’ store across the street, too, with nothing  but Alice souvenirs.  Sorry Diana and Dad, nothing reasonable for The Walrus and the Carpenter or Jabberwocky.  I did ask, though. 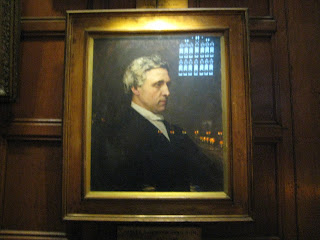 Then, to the Bodlean Library, also ancient and remarkable (built 1600’s) but no photos allowed, except in the Divinity Library.
Also, Radcliffe Camera was closed to public, but it was neat.  Mostly, I spent a lot of time just wandering around outside these hallowed halls, trodding cobblestone and wondering about the giants whose shoulders we are slipping off of.
Stopping again for tea at yet another Prêt a Manger I met a local Oxonian (yes, that’s what they are, apparently) who went to school for animation and loves the National Film Board of Canada, just like we all do (right?).  He does caricatures for part-time cash, and offered to do mine for free.  Sure!
His name was Josh.  I paid him a couple quid and we chatted for a bit.  He tried to convince me to stay the evening since Wednesday is a party night for locals and students, but I declined, despite the invitation to Fuzzy Monkey night at the bar he previously worked at.
Oxford was, all in all, beautiful.   And the air was  noticeably cleaner.  I was blowing my nose all day, and when I finally got back into London I got off at the Baker St. underground and right off I could taste that burnt rubberyness of London.  You know, it is almost like a city where you never get outside.  You are inside, and then you go outside, and it is so close, the ceiling so low and dark, the air so bad, the people so near, it just feels like you don’t know when you are in and when you are out.  Well, sometimes anyways.  Maybe all I am really saying is this:  I have decided that I hate the tube.  And there is no other way for a foreigner to have a hope in hell in finding their way around London without it.
Tomorrow, hopefully, I will just go to the library or something!