- St. Pancras Station,  3-story high or so sculpture
January 23rd, evening.
The last two days have been really hectic, and I am feeling pretty run down at this point.  Thankfully it is an early evening, and I can sit here and drink pots of tea and try to get some energy back.  I have a bit of a sore throat, but I am not sure if it means I am coming down with a cold or if it is simply the terrible air quality.  Really, it is so bad you can taste it:  imagine cheap tobacco mixed with tire grease.  Mmm!
Yesterday Viiu and I went all over town, chasing down information about the fare prices for possible trains to Lille or Manchester for day-trips next week.  In the end, I decided only for Oxford on Wednesday.  The price to Lille was going to be about £90 and to Manchester about £50 and that just wasn’t worth it for the day.  Oxford has special student rates, so I am going there round-trip for £13, which is wonderful.  So, after we saw half of London going to various offices (because Viiu doesn’t have the internet and claims that phoning it too costly) we stopped by the British Library.

I saw a pamphlet that indicated that the museum section of this place had some ancient Jain scrolls, so I thought it might be neat to see.  Little did I realize that this is a museum of rare manuscripts, and it was amazing.  I was absolutely floored to see some things.  First of all, there is a Shakespeare’s First Folio.  For real!  But when I got to Wordsworth’s original, handwritten copy of “I wandered lonely”, I think I actually swooned.  Holy crap, eh?  Written in his own pen!  There was some Milton, Coleridge, Samuel Johnson (Don, did you get to see the first dictionary on display?) and Darwin as well.  The music section was perhaps even more fun.  Manuscripts of Handel’s Messiah (complete with corrected spellings) and Purcell, a whole section on the Beatles (their hand-written lyrics and doodles) but what amazed me most was Ravel’s Bolero, written by the man himself.  I stood there and played the whole page out in my mind.  It was awesome.  A lot of people think that the Magna Carta is a big deal – but it means nothing to me.   Ravel and Wordsworth – woo hoo!  The sacred writings section was incredible too, for other reasons.  There were lots of totally gorgeous manuscripts, scrolls and hagadahs, some with ornate gold-leaf illustrations and the most gorgeous embellishments.  This is the stuff that you just never see in person.  But it is all there.  I wish I could have taken pictures, but that is not allowed.  There was a special exhibition on the lower level about how the English language evolved to what it is now – but that section had this huge line-up and a crowd poring over every part, so I didn’t take the time.
From there, we caught some dinner at ‘Food For Thought’, a seedy vegetarian restaurant that is the closest I’ve seen here to Hippy-food.  It is right central, near Covent Garden, and has the tiniest little space that you have to go downstairs for.  But the food is good, and groovy-looking servers were a breath of fresh air to me.
After that, unsuspecting, we go to the Royal Opera House (ROH).  On the way there, on the tube, I was astonished to have recognized (previously ) Premier League Football manager George Burley.  I joked with his mates and wished him good luck in the season.  He had some fun with me, telling me he had beaten Arsenal that afternoon 3-0 (when I got home and heard on the BBC that it was the reverse!).  Viiu had to explain to me numerous ways why a millionaire would be taking the tube – but I guess it makes sense now.  Still…
So the ROH - Now, I wish I was allowed to take pictures here, too. Because the whole place is so glitzy and gorgeous, you become immediately aware of how under-dressed you are.   The women are all gussied up and the men, mostly, have the best suits on.  Everyone is sipping champagne and looking out over glass walls.  When I entered the luscious performance hall itself, I had to ask Viiu to be quiet for a moment – it was just so stunning, so regal. 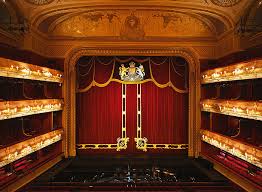 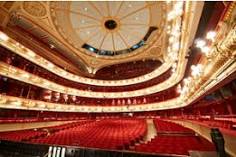 Oh, look!  I can link to images on the Web.  Handy!
It was pretty amazing.  Seeing Swan Lake performed in a place like that was a priceless treat.  It was really beautiful, and I was surprised how moved I was at the end – I actually got goosebumps in the final scene.  I don’t think that I would go see it 9 times (like Viiu will) but it sure was a nice evening.
--
Viiu is such a character.  She is my only extended family, basically, but she is more than enough.  Everybody should have an eccentric Aunt, I say.  I have to report back home that yes, she has, after 40+ years, actually quit smoking.  I honestly didn’t believe it:  it was so much a part of her that it was truly part of her character.  Viiu and cigarettes were synonymous.  In fact, the reason she would not visit Canada is simply because she could not go without a cigarette for the 8 hour flight.  Yes, even if it were at night.  The longest she could go, she used to say, was for one act of Wagner.  Yes, even at night.  But as the first family member  to visit since her quitting date 12 weeks ago, she is really done!  And, she is not as cranky as she says.  In fact, she is totally delightful.  We are eating at nice restaurants, despite the fact that she cannot help but grimace and make fun of my healthy eating habits and vegetarianism.  Viiu’s quote of the day:
“I believe that when we are born we have a certain amount of patience.  My students used up all of mine.  I have no patience left.”  (spoken when we had to wait like 5 mins for the tube)
She is something else.  Walking into the Royal Opera House, she was saying hello to people left right and centre.  One of her friends, who writes a ballet column for a dance magazine, was deferring to her knowledge on the subject.  There are maybe 2 days out of 2 weeks that does not have a performance to go to.   She has had tickets for November, 2011, since summer of last year.  This is a photo of her current stack of tickets: 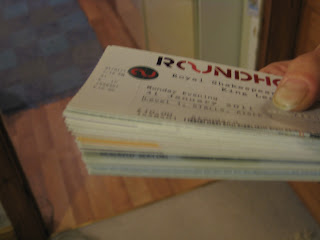 “This is not the biggest stack I’ve had, but if you want to take a picture, go ahead.”
Saturday afternoon I took the tube West to go the a home football game of QPR (Queen’s Park Rangers) v. Coventry City (see here).   God, what a blast!  It was so fun!  I had good seats about 7 rows up, in the corner.  I couldn’t really afford to go to a Premiership game, so I settled for the Championship league.  Man, I wish that my dad and Dave Murphy could have been with me – I know they would have appreciated and enjoyed it.  I made sure that I was sitting in the home team supporters section.

They sang and cheered, and it was loads of fun.  Every time a player (King) from C.City got the ball, they booed.  Of course, I did too.   But then he was the first to score – a sloppy goal too.  QPR came back and scored just before half and it was awesome.  I wish to hell I knew the words that the home supporters were singing.  One was to the tune of ‘She’ll be coming round the mountain” but seriously, even being right beside someone, I could not figure out the words.  The second goal in the second half was right in front of me.  It was a  beautiful build up and ecstatic celebration. (try to find a video?) So, so much fun!  I really feel like in 24 hours I got the high class of London (ROH) and the popular class (football) and by the end I had really experienced the place.