After feeling on the verge of a cold yesterday, I was glad for the evening off.  Last night Viiu was a real trooper and we found our way down to Piccadilly to find a vegetarian restaurant that sounded good on the internet.  And, it was.  Tibits was buffet style, sold by the weight, but in a really classy atmosphere.  I was amazed to find quinoa for the first time in London, and tried to sample lots of small bits on my plate (cream and chutney filled breaded hot peppers, glazed chestnuts, ridiculously good beans that tasted pickled,  and of course, plain alfalfa sprouts!). 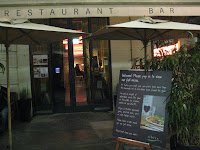 Even Viiu found something good to eat.  Well, at least it didn’t kill her, anyways.  The only drawback was that their espresso machine was broken, so she couldn’t have her black.  Here they ask for black coffee, or white coffee (coffee with cream – but no one seems to know how much.  This would never go with us Canadians, eh? And, the popular thing here is called a ‘Flat White’ coffee:  coffee, some cream, and a small bit of foam on top -  but not enough to make it cappuccino.)  I have tried a few espressos since here, but I have yet to have anything really good.   They like to argue about espresso and such, but it seems people are just picky about style – everywhere seems to have the same stale beans.  Yecch!
After giving up on the espresso, today I was resolved to find some good tea – which at this point I prefer anyways.   Online I found this prize-winning tea shop that Viiu said would be easy to find.  So after grocery shopping in the AM, when she went to her  1pm concert, I went the other way to find Post Card Teas.  I am so glad that I did!   I thought it was just a specialty tea shop, but it turns out that this is more of a connoisseurs emporium. 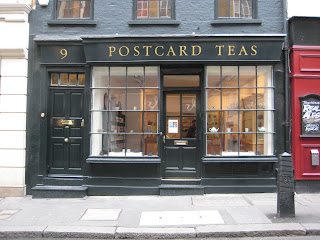 They don’t have a place to sit and have a cup, but they will give you a cup of tea to try something if you are tasting before you buy the dry tea.  Their downstairs is a small museum set-up, where they display teas so expensive they have to be bought on auction, and teaware of the same calibre.  £75 for a tea cup anyone?  One of their teas, mentioned in this image, “sells for £20,000 per 100g” at every yearly auction.  I didn’t buy that one.  But, for £29 you could try a 2 oz cup of it!! 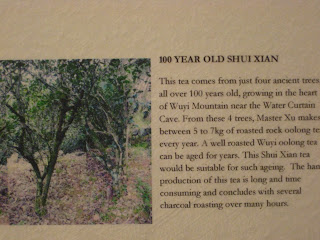 The oriental woman working there was amazingly helpful, and educated me on some of the finer points of tea after I proved to her that I wasn’t a tea-idiot in the first place.  She brought some out for me to smell, and after I assured her I would buy something she made me two cups of tea to help my decision. 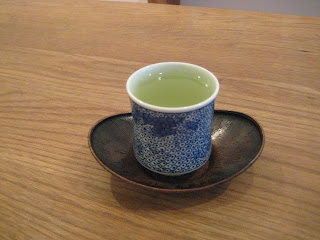 Probably the best cup of tea I have ever had.  It had this instantly refreshing quality to it, and tastes of grass and citrus overtones.  Do I sound like a snob yet?  Alright, well gobber off, then.  Really, though, it was very good.  It was such a nice experience there.  I was there only customer for the whole time I was there, and I sat and read some of their info, and they brought teas out for me to smell and chat about.  In the end I purchased the most expensive tea I have ever bought, which was one of their cheapest.  I had such a nice time there.  They travel twice a year to Japan and China to visit the small estates where they import their teas from – no middle man for them. 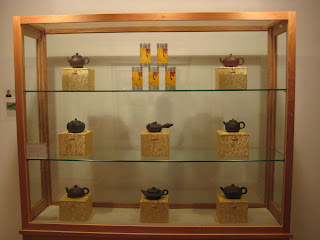 From there, I wandered on the tube while trying to find Cocomaya, a chocolatier that promised hot-cocoa that looked like it was straight from the movie ‘Chocolat’.  But, I couldn’t find it before needing to meet my aunt for lunch at Sirous, across the street from her flat.  I had this meal that I thought was going to be a salad and turned out to be this: 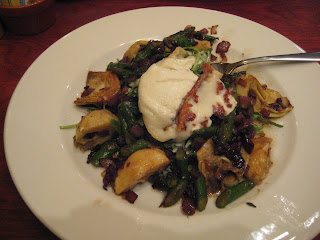 Fried artichoke?  Actually, it was quite good with that chunk of goat cheese melted on top.  Surprising, that’s all.
So we made our way to the National Theatre to see 12th Night.  We got there early so she could chat with friends.  We got to our seats.  We waited.  7:30 passed.  We waited some more.  Then, a very nervous couple women came out on stage and declared to the audience that a cast member had become seriously ill – and there was no understudy.  The show, apparently, must not go on.  Promised refunds, we were sent home.  We sat and had free drinks with Viiu’s friends.  They didn’t care much – most of them would see it again.  But I was disappointed, for sure.  So, Viiiu’s friend Nicolas, who works for the NT, is on the case of trying to fit me into another performance before the end of the week.
-------
It sure feels weird not having regular access to the internet!  I know that I am not the most connected person, nor that social, but I do feel a tad isolated in that regard.  Good prep for India, I suppose.  Still, strange.  I hear that home is getting belted with cold weather, but London is enough.  I have smartened up and started wearing long johns, double socks, and the down sweater that Nicolas literally took off his back to give me when I was cold Saturday night.  Plus, I bought a souvenir scarf at the QPR game, and I am actually wearing constantly.  Even inside.  The cold is so deceiving here – it is very damp, and I guess I figured that 3 C was warm compared to Canada.  These brits are hardy folk, I gotta say.  They are all mostly without hats or gloves, some without jackets even.  They just rush from the tube to the next place, hardly outside much.  But you see them and think you can handle that.  Wait a second!  These guys are running in shorts!  Sheesh!  Canadians don’t do that in 3 C!  No way!  I dunno, man.   Must be all that oily food or something.  Beats me.
I am feeling better late today.  Blasting myself with vitamins, eating lighter foods, sleeping a good long while, staying warm – these things are helping.  Thought I haven’t been feeling very much like my real self.  It is hard to meditate, since I don’t have my own room, and my brain has been a bit foggy any how.  I thought I didn’t get much jet-lag, but now I see that I had just caffeinated myself enough to have powered through it in the non-drowsy sense, but that mentally I have clearly been behind.  What is weird is the major pain in my lower back, hip joints, and legs that I had the first couple days here.  Now, I haven’t been getting any exercise (well, no running, soccer, or yoga classes) which surely plays a part.  Still stretching a bit here and there.  Also, crazy dreams.  Am I allowed to post that here? No body is reading this, right?  Hmm.   Maybe in India.  I can’t believe I am less than a week away!
Posted by Most call me Rob at 9:50 AM