Varanasi: only a 40 hour train ride away!

First off, my energy has been much better the last few days, and this morning is the first morning that I have not been hacking and coughing.  I am consoled by the fact that this is what pretty much every person living here does – the air is not friendly if you stray from the freshness of the beach into the streets.  But, at least the streets are paved here and they actually have a garbage collection program, so everyone is not dumping their trash into the street and burning it. I am not sure what has made the difference in my energy, but I have stopped taking the malaria pills and have cut out all rice and all sugar from my diet, and those are things that seem pretty obvious.  It means I am eating less authentic south Indian cuisine, and sticking to restaurants like “Daily Bread”(their website is humorously misleading.  It is a crappy little place with greasy tables) which offers continental foods.  So, I have been having Spanish omelettes, veg Franky (this funny bunch of cooked, spicy veggies wrapped in a chapatti) and hilarious excuses for spring rolls (imagine spicy veggies packed into small, doughy buns).
At any rate, feeling miles better.
Monday I met an interesting man, a Serbian named Anton.  I was strolling on the beach after 9pm before going to bed.  He started talking to me about Pondicherry, what I liked, where I was staying, and it came out that he was still looking for a place to spend the night.  I thought this was a bit odd, so I pried for info.  It turns out that this 50-something man basically was unemployed in Serbia and was fast running out of money there.  So, his sister bought him a plane ticket to India, and he is just trying to live here as cheap as possible.  He rents a room in Tiru for 2000Rs/month (about 40$) and eats largely from street vendors and ashrams.  Sheesh!  At any rate, I let him spend the night in my room, since I had an extra bed and he was going to sleep on the beach otherwise.  I just couldn’t let him do it.  Yeah, I know, I know.  But I felt it was right.  (And, I stuck all my money under my pillow, just in case.) In the morning he washed up, made his bed, thanked me profusely, and was out the door for 7.  Ok then.
I figured that maybe this good deed would help me get that damn train ticket that I have been anxious about for so long.   I needed to get the last minute ‘tatkal’ ticket that can only be booked 2 days before the train departs.  Train in India are a bit crazy – they often sell out a full month ahead of time, and although I tried to book this back in Canada, I was still waitlisted.  So I went down to the travel agent’s place for 9am, just as I had told him I would.  And I waited.  I was getting nervous as 9 passed and nobody showed up – knowing that elsewhere the tickets were now being sold.  Some other guy who shares the storefront offered to call the agent, and told me that he was on his way.  I can tell you that I was getting pretty damn angry at ten past 9.  I had no where else to turn to – all I could do was wait for this guy to saunter into the store.  I tell you, one thing that is crazy here is the business hours.  Nobody except a few road vendors are open before 9, and most other businesses either open at 10 or even 11.  But then, then! they close down again from like 1-3, or even 12-4.  This would be easier to handle if any, any of this was ever posted on some place like a door.  But I swear to god that I have yet to see, on even a single shop anywhere, anything resembling business hours.  What the hell?  So I just show up and hope you are open?  So you have to make sure that if you plan on returngin to a business, you ask them when they plan on being there.  Otherwise, you show up and they have that garage door type  thing closed over the front.
Right, so I was pretty fuming mad – at this point towards this guy and generally towards all things Indian.  I was trying to talk myself down from it, acknowledging that if I didn’t get the ticket, that it would simply be a sign to do other things with my time.  Well, in the end, the guy strolled in about a year later - at 9:15 – and after using a long stick to turn on the circuit breakers for his computer, managed to get me precisely the ticket I wanted.  The idiot even forgot to charge me his commission of 50Rs which he thoroughly explained – so I had to triple count his change, come back, and give it to him.  So, I went home and had my regular breakfast of a fresh papaya, feeling relieved.  That means I leave for a 40 hour train to Varanasi on Friday.
After that, I went and used the internet to book a room in Varanasi, and that went really smoothly, considering that I had been trying to phone a certain place every day for the past 4 days to book.  So I gave up on them, tried another place, and was done in 2 minutes.  Here is a link to the guest house I will be staying at : Suraj Guest House Varanasi. Yay!
As I was standing outside taking a picture of a man sleeping right on a busy street, oblivious to honking and traffic veering around him, this German girl who had been using the internet for 4 hours straight came up and asked me if I was hungry. 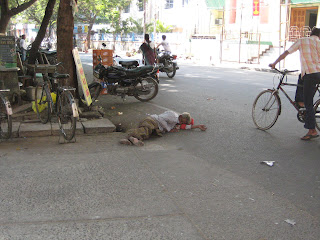 I said no, not really.  Then I clued in that she was asking for my company and if I knew a good place to eat.  So I had lunch with Susanna from Berlin and I heard her interesting story of her past 2 months in India – discovering yoga, quitting cigarettes, taking meditation classes.  It was actually a nice break to have the company.
After, I headed out to attend a class on the Vedas according to Aurobindo that was being hosted by Matthias Cornellsson, the man I was hoping to talk to afterwards.  The class was kinda strange – it was another teacher from the Aurobindo ashram, a Vladimir Iatsenko, who spoke beautiful Sanskrit and read Aurobindo’s The Secret of the Veda line by line to the class, analyzing and explaining as he went. 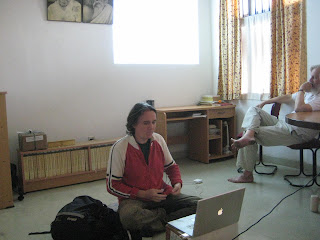 He was a fascinating scholar and beyond that, about as interesting as the ants that I watch crossing my window sill. Now this is no small book, and Aurobindo is probably the longest winded, Victorian prose-style writer in the world, renowned for his page long sentences.  This was amazing – it is going to take this guy like a year to read half this book to this class.  The whole time I am sitting there thinking, “Seriously?  You are still reading?  When the hell is this guy going to stop reading and talk to us?” Anyway, I met with Matthias afterward, and he was an interesting man doing some really good work.  (website: http://ipi.org.in)
I decided to try a new Indian restaurant for some a bite to eat, and as I sat down a young Indian girl with an American accent asked me if I was alone, and if we could dine together.  Uh… sure?  She was a nice Punjabi girl, grew up in Arkansas, did Engineering in Chicago, parents are doctors, etc.  Anita. She helped me pick good food and shared her Punjabi Thali – which was excellent.  She also is an avid cyclist and a huge proponent of community based cycling initiatives, having attended ‘Bike -Bike’ in Toronto last year.  Neat.  I walked her to the internet place after since it was her first day in town, and there I saw and met the first black man I have seen in just over 2 weeks of India.  He is a Londoner, from Camden (I told him about the Inspiral Lounge and he said I am the 2nd person to mention it to him -  but he hasn’t been home in so long that it was not open when he left last year!) and he figures he is the only black man in all of Asia.  6 ft 4 to boot.  He was hilarious, and we walked with him and his partner to help them find a place to sleep, since it was late and they had just rolled into town from a harrowing journey.
Yeah, so it was a different day – social theme I guess.
I was unable to secure a time to go back to the Matrimandir at Auroville – those people are ridiculously hard to deal with, so that is that.   Today I just stock up on food and prepare so that I can get the right bus into Chennai tomorrow morning so I can get to the train station to catch my 13:30 train.  Then, I arrive in Varanasi Sunday morning at 5am!  Crazy, eh?
Well, at least I got the 3rd class AC ticket that I was hoping for – I was really not prepared on getting the lower class ‘sleeper’ ticket for such a long journey.  So, this will be my last post until at least Sunday afternoon.   Wish me luck on a long train ride!  I am really looking forward to the experience, though I know by the end it is going to be miserable.  But, I can’t wait.
A few notes:
OK - I am figuring out driving in India, since I have been part of traffic a couple weeks, driving my rented bike all over town.  The horn thing is making sense, though I am still a bit unnerved by it at times.  See, imagine a city about the size of, oh, let's say Hamilton.  And imagine that for every car, you replace it with a mix of 5 motorcyles and scooters.  Now, none of these guys have indicator lights.  So, the horn is the signal that you are passing.  And, there are no traffic lights (I know, eh?!) so the horn is your indicator that you are entering an intersection.  And there are no street lights, so at night your horn is your indicator that you exist.  Now, add to that the peculiar fact that drivers just generally feel the need to honk when they are approaching you in broad daylight - as if you would otherwise have jumped in front of them - and it starts to make sense.
Posted by Most call me Rob at 7:19 AM