The morning of our first sleep in Varanasi – Hugo and I decide to tag along with Lee (Korean) Flore (Argentina) and Nao (Japan) who are staying our guest house and plan to pack a cheap rickshaw to go to Sarnath. The ride is like taking a scary roller-coaster. You know that scene in Ace Ventura when Jim Carrey is flailing his head around in the Jeep going through the jungle – no joke this time, that is what it was like at points. Much of the road was not paved, walls of dust, and the word valley would be closer than pot-hole. It was really fun – especially the ‘game of chicken’ parts…

Sarnath was small and beautiful. As one of the 4 most important sites in Buddhism, there are a few monasteries around, and mostly oriental tourists. This is the place where, after attaining enlightenment at Bodh Gaya, the Buddha gave his first sermon, laying out the dharma that is now the basic rules of Buddhism, and is one of the most important religious, philosophical and psychological teachings of man. I enjoy seeing the deer park, the commemorative Stupa and the only lately archeologically discovered remains of the temple where it is believed Buddha lived for some time. Also, a cute little museum that holds the head of the Ashok pillar – which is the statue of 4 lions that is now the national symbol of India. Hugo and the others convince me to break one of my cardinal rules for India – not to eat ‘street food’. But the Indians are lining up to this small Nepali woman, I am hungry, and I can’t expect them to make a trip to a restaurant just for me. It turns out to be amazing, and we get seconds. We ask what it is called, and are just told it is noodles. Right. At any rate, I had no adverse reactions – it was well cooked. 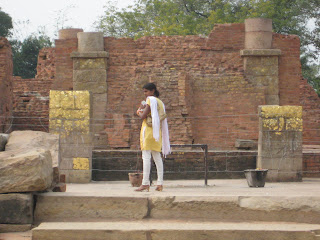 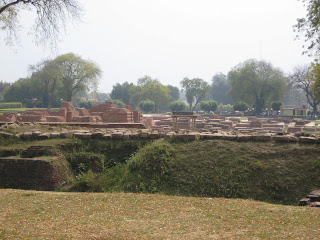 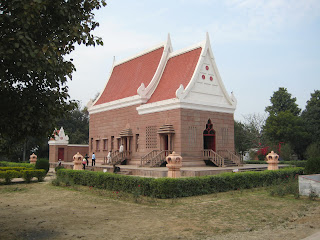 We head out early to see the South side of town. Hugo wants to see the Hanuman temple, but the cycle-rickshaw driver drops us at a big red temple that is not the right one. At least it is the right side of town for us to walk to BHU (Banares Hindu University) which I have heard so much about and want to see. It is quite disappointing, no interesting buildings or spaces, in decay, definitely no ivy here. We rickshaw across the harrowing pontoon bridge to the Ramnagar Fort which is incredible and strange.


We pay 150Rs (Indians pay 5) to enter – it is a museum as well. It is like nothing I have ever seen. Priceless artefacts sit gloomily behind cracked, dusty and unlit glass panes, dirty enough to look as if someone had thrown them in the case in a hurry 20 years ago and forgot about them. The Indians (who never cover their noses in terrible dusty traffic while I do) have their faces covered due to the stench of mold in this ancient fort where they are, loosely speaking, on display. Rugs made from spun ivory and silver are rotting and barely visible, elephant guns inlaid with gorgeous gold designs, jewel-hilted swords and daggers, palanquins made of ivory (imagine the princesses peering out!) all are miserable and wait only for time to turn them to dust. It is a shame – I can’t help but know that these items in a Western museum would be the focus of spot lights. The self-stated marvel of the place is a huge 5 by 6 ft or so time piece, built in about 1840 and still accurately showing lunar phase, zodiac sign, time, date, day of the week, sunrise and sunset times. Admittedly, cool. The guard asks us for money. As does the Brahmin at the temple on the Fort’s water view. Amazing. 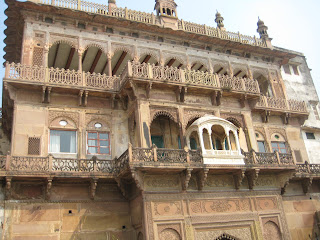 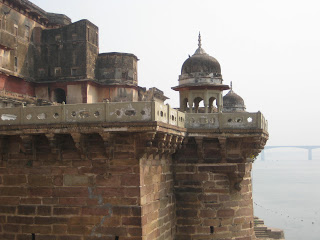 We have dinner later at the Brown Bread Bakery, which has much better Indian classical music than Ganga Fuji, and I barely notice that it takes about 30 minutes for our Thali to arrive. Really though, the music was great, and I was sitting directly beside the musicians. With different company, it would be about as good as a dinner could possibly get. 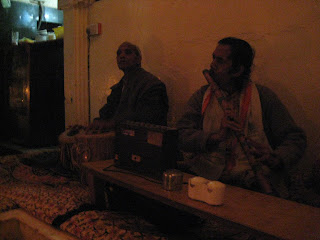 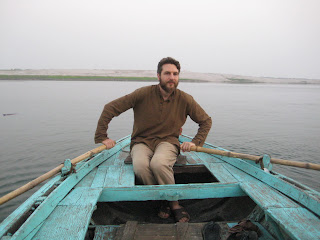 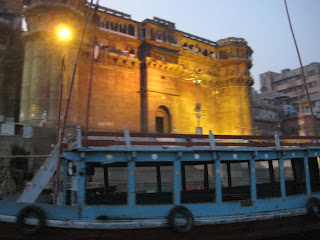 
After spending an agonizing 2 hours watching my box of books and clothes get wrapped by a drowsy man, I walk to the post office and leave it, paid, on faith. My nerves are tangled, and I buy Paan (sweet, not tobacco) from the main street on the way home since I have always wanted to. It’s not bad – but may have been a bad decision as we’ll see later on. Hugo and I go to the most authentic, least touristy restaurant we have seen in the area and wait with Indians to get a huge 45Rs special Thali which is very good. The night before – eating at Shree Café – I have one of the best foods I have had yet, ‘Butter Masala Paneer’ (very Kashmiri) as part of their 100Rs Thali. After dinner there, Hugo, an experienced, weekly player, asked me to a game of chess and incredibly, I win. Honestly I don’t know how, but being in the Hindu vibe, I invoked the God of Chess – but perhaps more importantly the inner guidance of my brother.

We decide to walk all the way to the North end of the ghats after lunch for our final afternoon and it is sunny and warm. “Hello Boat?! Hello Boat!?” – you hear this about every 2 minutes as you walk. (or you are offered Hashish or a massage or just plain asked for money.) Hugo takes a liking to the practice of responding by also offering them a boat, and it works pretty well to keep them away.

Precisely at the half way point, far from home, my bowels indicate urgency, and I wonder what I ate that is acting like Liquid Plumber for humans. Paan? Yogourt in the Thali at lunch or the night before? Racing back, I saunter nonchalantly into the Suraj toilet. A few times. 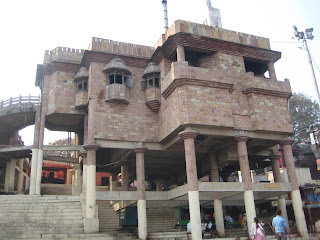 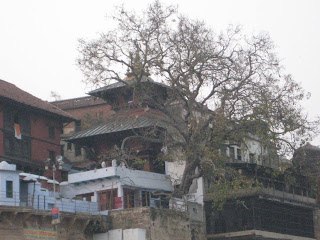 After re-hydrating (Thanks for the Emergen-C, Paula!) I wait for Hugo to return for 5pm so we can grab some food and rickshaw to the train for our overnighter to Delhi. (By a fluke, we are catching the same one.) At 6pm I was concerned - especially since I have discovered my sandals missing. But more pressing, is that our train leaves at 7:15, so just as I am giving up on him and leave the place, he comes racing in panting. He grabs his stuff but at this point we are in real danger of being late, and I am hungry enough that I need to grab something to go – Royal Café makes me a quick Veg. Sujkal. Bolting for the main streets to get a rickshaw (they are not allowed in the narrow alleys of the old town – not that they could fit) we are glad to come across the Suraj guest house driver and his friend gives us a truly memorable race to the station, through the insanity of Varanasi evening traffic. He sings and dances all the way like he is high and the 20 minutes are epic.

Jogging to the platform, people press against the train like it has free seats to a Michael Jackson concert. I find my #11 coach and join the throng. Squirting into the coach (isn’t this assigned seating?) I find my seat. A few short minutes later the train is moving. I breathe a sigh of relief but people are still bickering and yelling and pushing baggage at each other. And how the hell can there be beggars on a train? This evening is India at it craziest. OK – this is an experience that I signed up for, but already I don’t ever want to ride Sleeper class again. I put on my headphones since no one around me seems to speak or understand English and the clatter is deafening, and I pray for a long, long sleep waking up in New Delhi.