Well, all things come to pass, not to stay.  I asked, but the room is already booked, so I cannot stay at the Ramanasraman any longer.  I have to look for another place to stay if I want to stay in TV, so I will do that in the morning.  I am disappointed for sure – I have really fallen in love with this place – it is a sanctuary not only from the world but from the rest of the craziness that is TV. Hopefully I can find something decent that is not too expensive, where I can get to the ashram easily and be comfortable.   A Western style toilet would be a real bonus, too.  I guess it depends on how much I want to spend on a room.  Some are actually free, offered  by religious groups that promote their gurus, who want to do service to the world.  I think will let those pass, though.  I saw one and it was not exactly appealing.  No bed, no furniture, just a room.
Well, you get what you pay for!
Today I was a bit wiped out – I think from my epic hike yesterday.  My left leg feels bruised in the muscle, and I just felt sleepy all day.  I still walked up the hill to Skandashram just to get myself moving,   but it took significant caffeine for the rest of the day.  It is just so damn noisy at night!  Maybe Saturdays especially so, but it is crazy.  Those damn horns going all the time, then the packs of wild dogs howling and fighting, firecrackers, and then those beautiful peacocks go off at frigging four o’clock in the morning, sounding like a cross between a cat crying in pain, a goose, and a steam whistle.  And loud!  I need earplugs all night long here, and I don’t expect anywhere in town is going to be much quieter.  We’ll see.  I still love the ashram, so I will stay in town for at least a few more days, and then try to sort things out for Pondicherry and Auroville. If I can secure a good place to stay there, then that may change my length of stay here.
It has been such bliss, this last week.  Not a worry or care in the world – meals provided, silence and sanctity everywhere, perfect weather every day.  I really would never ask for more.  It is just divine.  I realize now that this place was the ideal place to spend one’s first week in India.  It is Indian enough to let you get settled, but still has a lot of comfort and security so as to not jar you too much.  Then you can venture out into the crazy world of TV in small bits and not get overwhelmed.
OK – off to my last dinner here!
--
Wednesday.
So, Monday morning I rented a bike and made my way around to find a new place to stay.  I really thought, at first, that anyone who would cycle or drive in TV was on a suicide mission, but it is funny the way one adjusts to a place.  The bike was a pile of crap – but what do you expect for 25R (50cents) a day? 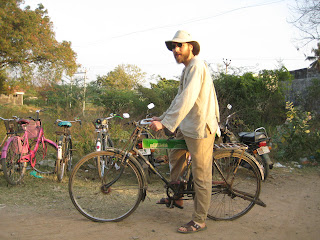 I wish I could show it to the guys back home at Recycle Cycle – they would have gotten a kick out of it.
Things were pretty full – this is busy season and the place is a hotspot for westerners doing the spiritual tourism thing.  Amarjit has his daily schedule revolving around attending 3 or so satsangs with various guru-types that cash in on the white folk.  There are dozens to attend every day if that is what you want.   The biggest one here right now is a guy named Mooji – in the Papaji lineage.  Every day a crowd of 400 or so non-Indians go to see him speak.  But there are too many to list.  Amarjit’s favourite is a Mataji (one of the many – the name is basically mother) and she walks into a crowded room, looks silently at people for about 15 minutes, and then leaves.  She draws quite the crowd.  I went one day with him for the heck of it, and I felt a kindly soul, but nothing transformative.  But to each his own.
I decided in the end to stay where Amarjit was staying because it is a pay-by donation type of thing put on by this quasi-ashram of devotees of a certain Vallalar.  They claim that Vallalar ( d. 1874) was transformed into light – he could walk through walls, he did not eat or sleep, and photos could not be taken of him.  Instead of dying, he locked himself in a room – and when they checked it a few days later (3, maybe?) there was nothing there but a note saying something to the effect that he was now everywhere and always with them.  At any rate, these people were quite nice, and they are really big on offering free meals and doing service for others.  The meals we had with them were fantastic and they just stood there and waited to pile on more and more food.  Possibly the best curry-roasted potatoes ever.  However, the room was the opposite -  appalling.  There was no mesh over the windows, and one ‘window’ was just a hole high up on the wall.  The bathroom was hilarious, and water sprayed out of a crack in the wall constantly.  We joked that it was a luxury suite because you got a shower while you peed.  Yeah, a bit of a dive, we would say.   But for about a $1.50 a day – meals included – I guess we wouldn’t complain.\
However, the rooms had not been in much use lately, and there was something in the place that we were reacting to – mould or something.  The first night was truly miserable.  I got this wicked sore throat and was bringing up mucous like I smoked a pack of beadies before bed.  I thought that it was because I had biked downtown (which it still could have been ) to buy mattresses (I wish I had a photo of me biking with two mattresses tied to the back of the bike – there was nothing in the rooms and we figured it would be a donation when we left) but Amarjit was reacting too.  It was terrible.  Barely slept.
Posted by Most call me Rob at 10:48 PM