My friends, this, this makes all the rest of it so much more bearable. 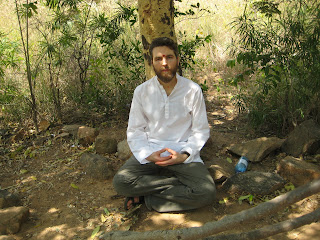 So, I spent the last few days largely alone and in silence.  Well, there were loads of people around, of course, but I wasn't talking much.  It was wonderful.  I can't believe it is Sunday already!
It seems so amazing that this is only my 6th day in India.  I have been here for so long!

This is my account of the last bunch of days:

On my first day, when I went up the mountain for the first time, I encourntered this sadhu who has been living on the hill for just over 10 years.  He smiled and we locked eyes. Then he said, “I have seen you before.”  I just smiled.  What was I supposed to say?  I sat with him for a while and tried to chat in broken English.  He gave me a photo of Ramana as a blessing – it was a nice gesture and I was on my way again.
It is Wednesday, and it is the end of my third day in India.
One thing you don’t really think of  on your first visit to India is how much time you are going to be spending in bare feet.  You have to take off your shoes before entering just about every establishment, store, restaurant and especially, temples and ashrams.  Right at the street here there is a gate for visitors to check in their shoes you can’t wear them basically anywhere on the premises.  Even on the sacred hill are you supposed to be barefoot.  My first day, it took me probably less than 2 hours for my winter-boot-soft pale feet to be raw and sore and threatening.  The guide on the hill at least gave me his chappals (slip on sandals) to wear or else I would have had to turn back.  But no wonder no body here has good shoes – they are at constant risk for being stolen.  Yes, sure, I saw Slumdog Millionaire.  But sandals are strewn about everywhere.  Viiu, I am sorry – I should have brought those crappy Birkenstocks I made you send home!  I need to buy a cheap pair of flip-flops or something pronto, since my Keen’s are worth way more than their price to me – they are, if you have never owned a pair, the greatest all-purpose warm weather shoes ever made.  Sure, I get pointed at by Indians and Westerners alike,  but man, are they comfy!  And those covered toes!  A Godsend.
I am sharing my room with a sweet british/ Punjabi guy named Amarjit.  I met him because I thought that he was Canadian as he was carrying his stuff in a President’s Choice bag.   Turns out he has only lived in Canada for a year.  He is a devotee of Adi Da, and has spent time living in Fiji at his ashram there.  He needed a place to stay for the night so he is sleeping on the floor of my little room.  That is ok – I still get my peace, but I will be glad when he is gone too.  He is a super nice guy, though, and he makes me laugh with his simplicity.  It doesn’t really bother me that he swears by the curative properties of drinking one’s own urine.  He is not pushy about that, Adi Da, or anything else.  Pretty easy going.  The plus side is that he knows the town well and has given me the tour, helping me adjust and to know where there is good cheap food, who sells the best coconuts (for 10r!) and where the internet is in town.  There are a lot of westerners here but nobody really talks in the Ashram. You kind of keep to yourself, you know?   There is a lot of chanting, a lot of meditation, but not much social.  Of course, I just don’t know anybody, that is all.  I heard a girl speaking about being Estonian today, and every European language is well represnted here, for sure.  Seems to be a rather large number of Russians, though.  Way more than any other.  If a sign has any other language on it besides Tamil or English, it is going to be Russian. But I guess that this is a cheap Winter getaway for them.  Not sure.  Ramana Maharshi must be a big shot there.
--- 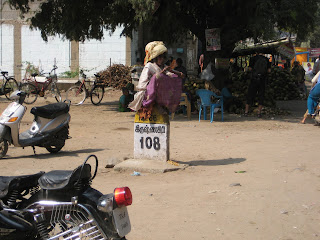 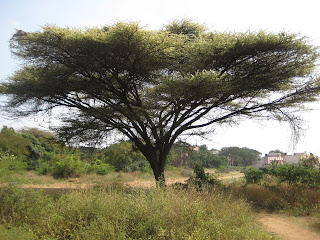 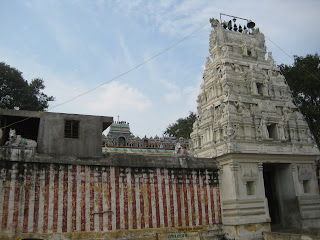 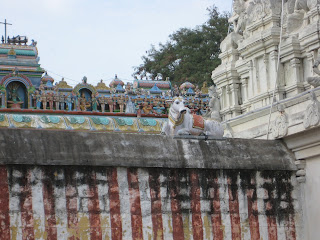 Friday, February 4, 2011
So, apparently, it is true that about ¾ of the way around the hill, the path ends and you have to take the streets back to where you started.  Great.  Thanks for mentioning it!
Well, it was just part of the experience now, wasn’t it?
So today I go up early, did a meditation, ate my superlative papaya, and hiked up the hill so I could meditate early in Virupaksha.  It was wonderful. When I got down I saw Amarjit, and we had chai across the street before I headed for lunch.  After, we had matcha and I explained to him that I really need to be in solitude and this time I think he got it – I haven’t seen him the whole rest of the day.  In the afternoon I took a walk into the busy city centre and bought new chappals (Sandals), a padlock, and a metal cup, then an immersion heater so I could make tea in my own room (150r)
Brillaint idea, Amar!
After, I headed up the hill again and read and meditated and listened to music as the sunset. It was incredibly beautiful and I hope to do that again and again while I am here.  I was reading the Flower of Life book to re-learn the Merkabah meditation, and finally did that and practised it on top of the hill – right at the summit of one of its lesser mounds, most Westerly. It really made me feel high. It was incredibly nice.  Dinner was not filling enough so I went to the other ashram that Amar mentioned and got a good Dosa for 20r that filled me up good.  Only 2 more nights here?  Not a chance!
Listening to Watermark
And Dayvan Cowboy
As a red Indian sun
Burns out another day.
With tears for ink,
Joy is a warm breeze
Carrying me from this summit – Arunachala,
To yet another
Saturday Feb 5
It is amazing that all of this was possible.  All this time, it has been possible.  All I had to do was buy a ticket and get on the plane.  Really, not much else is very necessary.  All these long years that is all I had to do.  It seemed so huge, so unlikely (so expensive).
--
So today, after breakfast, I went for a walk up the hill.  I had not intended to do anything more than look for the way to get to the very top, should I choose to do that another day.  I asked the man who lives on the hill, and he gave me a pointer on how to find the path, and it was pretty easy.  At 9am I was already very near the top – I thought.  But then that summit gave view to another summit, and again and again.  It was very deceiving!  Every time I thought I was close, there was another peak looming before me.  Distances are strange to me here, and I’m not sure why.  It seems like just a 3 minute walk up the hil and already you have this vista before you, the whole town and countryside spread out.  But then the hill itself took way longer to cap then I figured.  I was just worried that I was going to run out of time and be later for the 11:30 lunch.  But I hoped that it would take shorter going down.
When I got to the top, it had been a tough hike, with lots of scrambling and guessing.  I saw no one else on the way, and I figured I would be the only one up there.  However, nearing the top I found a couple men meditating behind a rock, and then at the very top, there were about 4 others.  Some swami or caretaker of some kind has built a little shelter up there and I think he was living there with a few dogs.  Man!  That would be quite the trek just to get food and water!  It took me about 2.5 hours to get there.  The very, very top of the hill was neat – right in the clouds.

I could actually see the wisps skirting over the edges around me, and the view down to town was obscured by the cloud.  It was breezy, and many degrees cooler – which was OK by me, since I was sweating like mad.  The top is very flat, and it is terribly black, charred and greasy since every full moon they smother it with ghee and light the whole thing up like a torch which you can see for about a hundred miles.  Pilgrims come at this time, and tourists are warned to forget about getting a room in town during this full moon period.  Hindus come from all around India to walk around the sacred Arunachala, since it is considered the physical embodiment of Shiva.  At any rate, you gotta be careful at the top of this mountain.  It was very slippery with all that coating of hundreds of years worth of burnt butter.
I didn’t linger,  but started back to catch lunch.  A few minutes down I realized that I was not at all going back the way I came.  However, there were pretty clear arrows painted in the rock (something lacking on the way up) and I passed others going this way.  It was a breeze compared to the way that I had gone up, and this path came down to connect with Skandashram, from which point you can take its smooth and easy path.

I got home with plenty of time to spare, so I figured I had time to shower and clean up.  The water in my room wasn’t working, so I cleaned my face and feet down at the faucets they have around the dining hall and shrine (to clean as you come and go from dinner and to clean your feet before going into the shrine).
Pretty exhausted at this point.  I went up to watch the sunset again, though, and it was just a pretty today.  Man, this is all so wonderful!
--

My head waggles, yes and no, and I feel
The crowded, noisy streets in my veins,
The sadhu, orange-clothed in my mind,
The blue bright day breaking
On a clean meditation hall in my heart.

Kate:  thanks so much for the bed sheet and towel – they are both perfect!  I bought this ‘Frost Tea’ at the store across the street – it looked intriguing and I was curious of course.  It tastes amazing, it has this mild sweet flavour that I have never encountered in a black tea.  It was 120r for 50g.  I looked it up and apparently it is a very precious oolong that is cultivated after a frost and has this coveted sweetness to it.  120r!  I sure got a good price on that, eh?  The website that I read was selling it for $11 for 50g.  I wonder if they sell it in Canada?
Tomorrow I supplicate myself to the management here to see if they will let me stay on for a few more days.  If not, I will just have to find a cheap room to rent nearby – I do not want to leave this place!
Posted by Most call me Rob at 7:27 AM