Srinagar - blessing in the vale 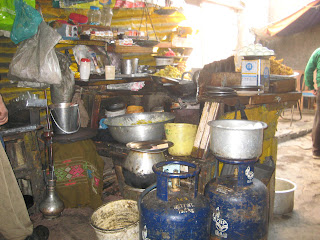 Again, I was invited on a tour with Firdous and the Bangalore couple – this time up Shankaracharya hill.  This is pretty cool.  The hill is the highest thing in Srinagar and the city is formed between and the lake.  The temple on its top was built somewhere around the year 500, and they have no idea how on earth the enormous slabs of stone were brought up the hill.  It isn’t supernatural or anything, just curious and astounding that such effort had been made at that time.  More significant is that Shankara (basically the founder of advaita Vedanta and it’s most significant proponent) attained his enlightenment here before setting off to create the four maths or learning centres of advaita throughout India.  I wish I could have stayed to meditate there – maybe another time.
In the afternoon I took a 4Rs bus to Lal Chowk (the main shopping area) and enjoyed walking the busy streets without getting mauled by touts.  Another good thing here is that they don’t always clamour and shout at you to bring you into their stores.  Amazingly, I can even browse inside stores here in Srinagar often without even being approached.  This has never, ever happened to me in India so far, and I am guessing it is their lack of foreigners plus their inherent politeness working.  I was actually enjoying shopping a little, since now I feel that I can actually buy something without worrying about weight and size etc.  I am going to buy another cheap small bag and pack it up with gifts for my return.   The prospect of a bag loaded with kashmiri goods is admittedly very exciting to me – I am going to try to bring tea spices and pickles too – and it should be ok. We’ll see what I can afford and what I can fit – I plan to push the limits of both.
I passed about a hundred shoe stores – they must have a thing for shoes here – and I since I could use a new pair for the cold weather, I might buy a pair of nice Clark’s that I found for 700Rs (approx 15$).  Believe it or not though, that is expensive for shoes here!  (Possibly they are stolen, I have come to think). Good thing I wasn’t wearing good shoes though, since I stepped right into a street sewer so stagnant that it looked like concrete.  Did I mention I was wearing my open Keen’s like always?  The men on the corner laughed at me, as did I, but it was utterly disgusting and I brought the smell of a toilet with me the rest of the afternoon and scrubbed by right foot and shoe like a madman when I got back home.  So, if you want to know what a Srinagar sewer smells like, there is a good chance my right shoe will never lose the stench.
I did find the Gulshan bookstore that I had read about and got lost there for over an hour.  I ended up chatting and having salt tea with the bookseller that hovered by me the whole way, and it was nice.  (Once you break the ice with these people, all their friends come by to watch and listen.  If you want to be the centre of attention, just be white and come to India.)  They are publishers as well and have a whole wall of Kashmiri books.  I bought a nice book of info and recipes about Kashmiri cuisine – yes I am actually going to try to make some of this stuff!
I have not mentioned it yet, but yes, I was a bit worried about coming to Kashmir.  As soon as you mention the place, people get concerned looks on their faces, and ask you if it is safe, if you know what you are doing.  But right now things are very peaceful, and the people are very cheerful about that.  Yes, the military presence has been tangible since Jammu, and it is a bit unnerving to see men with rifles at regular intervals.  But really, this is just another place.  I see now that in all these places like Kashmir, Pakistan and Afghanistan (which are all very common, and all very close, by the way) people are still going about their lives.  The rest of the world perceives the place to be in tatters – and of course sometimes that is true – but even during the hard times there are businesses running, children playing cricket in the fields, universities handing out grades to aspiring young adults.  It is possible to visit Kashmir.  And it is possible to do so easily and delightfully, as well.  People are warm, living is cheap, and life is good.  (The women are surprisingly white skinned, quite often, too.  And I mean not just fair, but I keep on doing double takes on these white faces that look more Greek than Indian.  And yes, the Greek influence here is ancient and real – their folk medical system is still connected to the ancient Greek system, called Unani. I’ll get some pictures soon.)  Srinagar is an alpine town, a place for the aesthete, populated by lovers of nature and of fine crafts.  It feels like a town like Banff or Lake Tahoe, but you can afford it.  I love it.
Posted by Most call me Rob at 10:15 AM