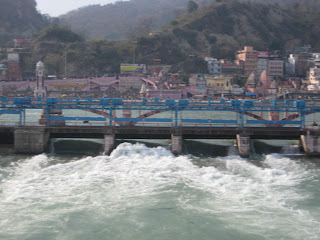 Q:  How long does it take to drive the 250 Km from Delhi to Rishikesh?
A: 9 hours.
Yes, well, welcome to India.  The first bus that arrived managed to break before we even loaded it and would  not start again.  But the second bus managed to arrive only 1.5 hours later, which was better than I expected.   As we waited, grumpy for having to get up so early just to wait, we pulled open the fresh newspapers coming into the guest house lobby, and learned about the earthquake in Japan.  We went to the TV and crowded around, finding the enlgish news channel and watching astonished, just as everyone else in the world was surely doing.  I borrowed the internet for 5 minutes to shoot off a query to Ben and Shiho, and started into earnest prayers for their wellbeing.  At this point, I can only trust that they are well and I believe in my heart that this is so, but it is terrible to see Japan so devastated.  Agh!  Ben!  Come home now, buddy!
So at 8:30 we leave for Rishikesh, the International home of yoga, and 12 of us settle happily into a luxury bus with 19 seats and 2(?) drivers.  The drive is full of wicked Delhi traffic and then brutal construction restrictions and winding hilly routes.  But, we sleep stretched out across multiple seats, have fun with the PA system, and share good music.  Mattie has some great stuff I’ve never heard of (Bright Black Morning Light) and Jess and I bond over Joni Mitchell’s Blue.
Arriving in Rishikesh’s northernmost sector, where all the ashram’s are, we have to walk the last km to the Parmarth Ashram – the largest complex in the area.  It is huge and fully of crusty hindu sculptures and art.  Generally, I am unimpressed with Rishikesh.  It is pretty enough, nestled in the foothills of the Himalayas, on the bank of the fresh, mountain springing holy Ganges, but it has no allure, no mystique.  It has been tailored into a tourist market, where yoga is the scene and the nouveau-hippies alter between groovy and smiley looking folk who wear Krishna-painted T-shirts, and those wearing all white kurtas who give you a look that says, “don’t mess with my enlightenment.”  Oh, and of course the plain-old, very European looking tourists.   They always seem to look terribly confused about what exactly they are supposed to be enjoying at each place they visit.   But they are determined to figure it out.
We only get 2 nights, 1 full day here, and I am glad.  The shopping is good and cheap, and I continue my obsession with Chyawanprash, this glorious Indian ayurvedic concoction that cures everything with a combination of 49 or so herbs, and I buy yet another brand and bottle – this time an expensive version fortified with gold, silver and saffron.  Cool!  How can I resist?  I really, really hope that this stuff is available in Canada somehow.  I love it and I have managed to get Emma on it as well.  Her latest bottle of it cures “coughs, colds, fatigue, tuberculosis, mental retardation and constipation.”  Yes! 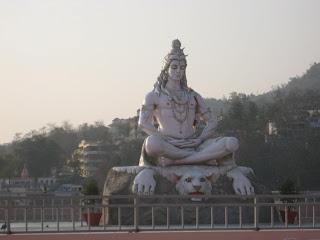 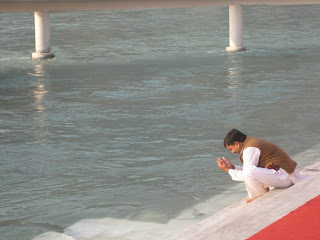 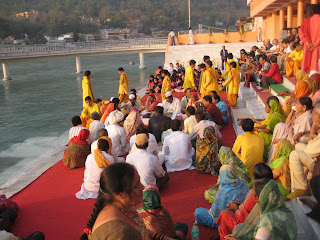 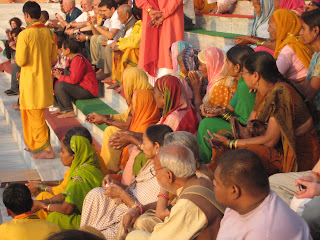 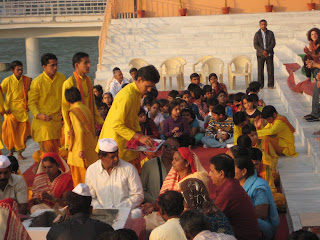 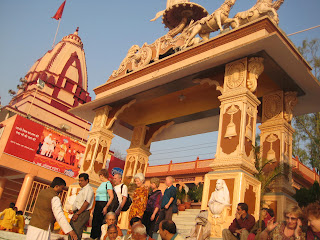 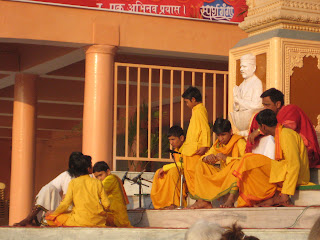 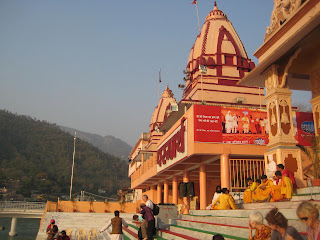 Soon upon arriving I see a poster for an annual 2 day music festival in honour of a certain sitar-playing swami.  Unfortunately I did not manage to obtain a copy before I left so I could have the names of the performers etc., but maybe I can look it up from home.  At any rate, the 2 days were precisely the days we were to be there.  Naturally, I made this a priority.  So, at 7, I made sure that I went to the Ashram common room for dinner, and then went to the main hall for the concert.  It started much later than advertised, but it was absolutely amazing.  It was by far the highlight of the trip to Rishikesh.  The calibre of the performers was absolutely top-notch, and it was free to boot.  I was astonished.  The first performer was an eight year old tabla prodigy.  I figured he would be good, but this kid was great.  It was, as they say back home, sick.  You could tell he had real talent – not only was he technically far beyond his years but he was daring and creative, and looked serene the entire time.  He also had some funny mannerisms that I really enjoyed, he kind of put his head on his shoulder when doing something particularly interesting.  Yeah, I have got to find his name.  Next was a singer who did a whole 4 section raga with accompaniment, and well after 9pm the last act when on, a sitar player who is a professor of music at Delhi University, backed by a fabulous tabla player who has played with Ravi Shankar before.  It was incredible.  We went to sleep just past 11 when they finished, with divine music wrapped around us like blankets. 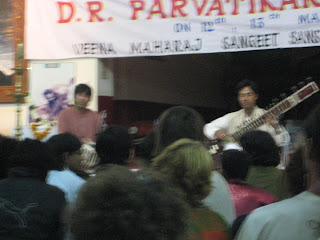 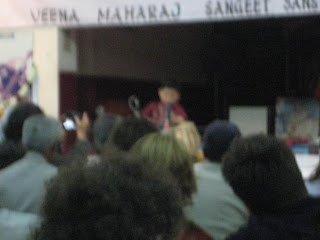 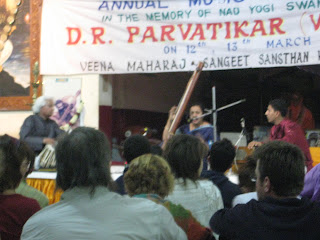 In the morning as a group we visit the Divine Life Society ashram on the other bank and take a 15Rs boat back.  This ashram was founded by Swami Sivananda and is the real deal.  It is vacant of foreigners.  The pillar stating it’s rules and values is beautiful – I hope the picture comes out when I get time. 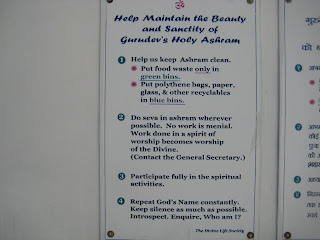 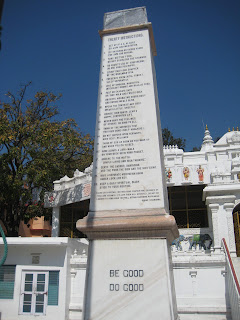 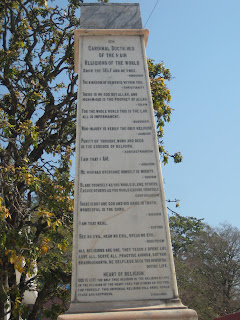 In the afternoon, Joseph, Emma, Dale and I decide we need to seize the day and purify ourselves in mother Ganga.  I was not about to do this in Varanasi, but here the water is much nicer, though Prof. Bryant still warns us not to get our whole head under water.  We don’t exactly heed this advice, though.  The water is so icy cold that I am actually dizzy by the time my legs are entirely under water.  Then, I just go for it and dive in with a prayer.  It is cold like Tobermory water in spring!  This water is Himalayan glacier water, only a day or so from its source.  I don’t know how divine it is, or how capable of spiritual quickening, but it sure is refreshing and we are all a little more joyous afterwards.

Unfortunately we later find out that another member of the group, Don (who tends towards being flighty and easily distracted) went for a dip by himself.  He got to talking to a few locals while drying off (he loves to talk and makes friends everywhere we go) and discovered later that he had been purified of his wallet, containing some money and his passport.  So, he had to take a little trip to the Police station, where they refused to file a report of anything being stolen – only that he “lost” his passport and could not find it.   It should not be hard to get a new one, we are back in Delhi soon, but it is a shame.   Don is the ‘special’ guy in the group, the one always getting lost, left behind, doing something unbelievable, and we just shake our heads – “oh, Don.”  He is kind soul, though, and though he frustrated me at first with his energy, non-stop talking, and actively melodramatic perception of every little thing, at this point I just want to give him a bug hug.  (Generally, I am having about as hard a time being in a group as I figured I would.  I enjoy the people for the most part, but it is hard to get the ‘me’ time that I need to function properly.  I can’t handle watching TV before bed, but when you share a hotel room, sometimes that happens.) 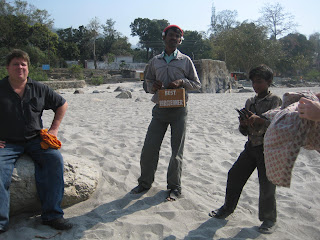 That night there is another concert.  Same format: starting just past 7 and 3 acts.  The first kid, a 12 year old tabla player, was good but a show-off, and not nearly like the beauty of the younger one the night before.  Then, another singer, and last, a flutist who serenaded me into the stillness of night.
I attend the 6am yoga class at the ashram the next morning before we leave and the best word to describe it would be hilarious.  Lead by a 103 year old scrawny swami and his English translator, we are guided through an hour-plus of strange movements that are unlike any yoga I have done.  There are many variations on massaging the eyes and eyebrows, and an exercise where we are told to simply open and close our mouths for a minute.

There are a bunch of breathing exercises,  but mostly it is just plain old breathing – looking up, looking down, bending to the side.  Interspersed throughout, we have to lift up our arms in no strict way in every direction.  After every movement the swami would say the only word he knew in English, “relax” and he would flop his arms in a semi-circle from point up, down to his sides, and without even a fraction of an instant pause, launch into the next movement.  Along with just about every one of the 60 or so others, I stopped even trying to do this frantic ‘relax’ movement in between other motions.  My favourite was when he backed up and were told that this movement “would give us energy like a tiger.”  He then proceeded to shuffle forward and stretch out his arms fingers like wimpy claws, screaming “Rarw!  Rarw!” with each shuffle.  The devoted mimicry in the audience was unforgettably funny.  I just had to stick around for the whole thing now, didn’t I?  The climax was when we ran on the spot – fast, faster and fastest – and then suddenly he yells at us to plop down and lay flat on the ground to observe our breathing in silence.  From sprint to savassanah in 3 seconds?  Sure.  But, Mr. Yogi swears that for all his 103 years he has not been sick due to this practice, and that must all bring this home to teach everyone, for a better world.  Well, it is a good story at any rate.
At this point, we are back on the bus to Delhi and I am glad to be out of Rishikesh.  Sure, the blonde super-models in white sari’s that served us dinner were interesting to the men in the group, but I would like to get back to the REAL India. 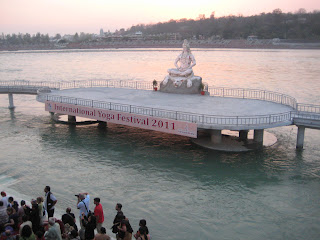 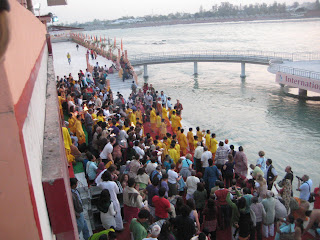