I think I mentioned that I am not fond of rain, right? People who know me know that I am not good with cold, and the rain here has been cold. As soon as the moist mountain air drops in, you can feel the temperature drop. It can change on a dime here. This morning, it was sunny and nice. Christine said, “it is a beautiful day.” I replied, “Well, it is right now.” Sure enough, you drink some tea and suddenly it is raining again. Bah!

The last two days have been like that. I am having a bit of a hard time having cold feet and hands for most of the day – it is hard for me to stay in my body and enjoy living while and I am cold like that, and staying here I have not been completely in charge of my time. I can’t just take a hot shower whenever, nor can I hide in bed or something. Otherwise, I have been having a really interesting experience of rural Kashmir. Living in this home and often dining with the full family down the street has been amazing. 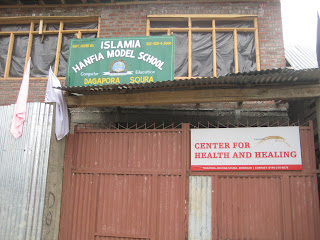 Yesterday we did very little, though we did drive in to Lal Chowk to try to finish my epic adventure of “Viiu’s sweater”. Yeah – ask me about it if you want a long story. It did not end yesterday, but it needs to tomorrow. (I know that she will not read this until much after I have seen her – so it is safe to write about it. She does not have or use a computer so believe it or not my mom is printing up this blog in chunks to mail to her so she can read it. Isn’t that against some kind of law or something?)


In the afternoon I took a long walk during a particularly sunny break, and it was divine. In the evening we watched some of the tail end of the cricket world-cup final before dinner. It was fun sitting up in this cold room where the TV got a special power supply from down the road at an uncle’s place, so that during a power outage we could still watch. Manzur gets the remote – he is the eldest son and the head man around here. 12 others sat around in matching pherans. Yeah, I got a loaner too. We watched cricket and flipped to a bollywood movie (Pardes with Shah Ruqh Khan) whose climax was filmed largely at Fatepur-Sikri, which was kinda cool and totally hilarious. After dinner, none of the guys wanted to watch the end of the game. They were nervous because India had been batting quite well, and they did not want to have to watch them win. They were cheering for Sri Lanka simply because they cheer against India (reminding me of the way I cheer for whoever is playing against Manchester United). I wanted to watch the end, but I would have to wait until late in the morning when I spoke to Manzur’s brother and he confirmed that India had won in the end. I never got the score, but everyone talked about how the Indian team captain was given as a reward a crore rupees (million), a helicopter, and a hotel. Must be nice.

The Indian President apparently told the nation that he would lower gas prices if India won, but that did not happen today. In the morning Christine and Manzur held a hospital ‘camp’ (read: walk in clinic) in the next town over. Nobody was showing up and they couldn’t figure out why. Then they realized that the man they had relied on to announce the date probably did not do so on purpose. He runs another pharmacy shop nearby and they figure he did not want to lose any possible business that we may have done by selling some prescriptions. They though he was trying to help when he gave them this space to work from, but now they figure he was just getting them out of his area. And this, folks, just shows the unfortunate side of things here. You try to help and you can get thwarted by the strangest things – not the least of which is pure greed. In the afternoon Manzur decided he was going to take a few guys and drive us all out to Manasbal lake, a picturesque lake situated at the bottom of a craggy mounting, just short of an hour away. I was a bit cranky, having been stuffed with rice and nadroo (lotus root curry) past healthy limits by kind aunts at lunch. However, the lake the mountain were beautiful. 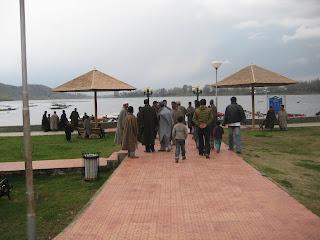 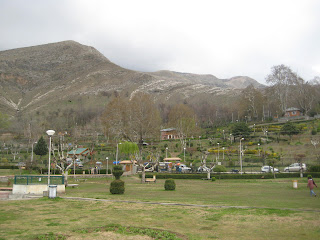 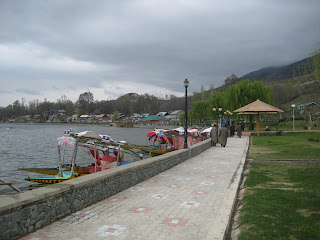 It was frigid wind coming off the lake though, and I would have given a hefty amount of money for even the worst hot coffee. It was spitting as we strolled, and it started pouring almost as soon as we piled back into the Sumo for another bone jarring bounce home. I don’t know how but I fell asleep despite the Kashmiri sufi music (click link to listen) Manzur has playing at every moment the speakers work.  Did I mention that he is a sufi?
After instant coffee back at home (seriously, it was amazingly good) I was almost warm when we took off again. Dr. Fawzia wanted me to meet her very spiritual brother, so off we went. However, the one road back to Srinagar was blocked with a bit of a traffic jam. Trucks were turned off and empty. It did not look promising. It turns out somebody up the line at one of the narrow lanes that fits only one vehicle, got stuck. It is a bad hill, for sure. After a half-hour most of the people we had been driving into town gave up and jumped out into the mud and rain with their sandals to walk home. I stretched out and fell asleep. I thought it was pretty clear we were not going to go anywhere, and I said so about 3 minutes in and then held my peace. After an hour we finally turned around. Oh, did you know that they don’t have heat in Indian cars? Yes. Really. Not even an option on most of the Suzuki/Maruti’s and Hyundai’s here. I was frozen.

We went to the family home and I de-thawed my feet on a kangri as we sat and watched children play before dinner. Tomorrow is my last full day here.

Wow. I can’t believe I am already at my last full day in Kashmir – my 2nd last full day in India. Traveling is exhausting. But wonderful, too. I can see now that virtually every thing that I had been told about Kashmir was wrong, and the parts that were right I was not able to comprehend until being here myself. This is a place so utterly foreign that it is a good thing I did not try to start my journey here instead of Chennai – I think it may have been much more difficult.

I must say that I have certainly had quite the tour of India’s major religions though. Well, I have had quite the tour of India. Sure, I did not go everywhere. Not by a long shot. But I do feel like I have done something that makes my experiences in what India is, and what she has to offer. I realized that it would be wrong for me to say that I have spent 2 months traveling India. I will have to say that I have traveled to India and Kashmir, for this is – right, I now see – they way both Kashmiri’s and Indians talk of these two places. And I wanted an experience of Kashmir too, which I got for sure. Yes, I did not visit some of the major tourist spots, but I have sat in some homes and shared tea glasses with the locals in a way that I doubt many of the already few Western tourists choose to. All of that is pretty special.
﻿
﻿
But today I have mostly been grumpy and cold, and I am praying for the sun tomorrow. If it is raining when I wake up, I tell Christine, then she is simply to bring me a carafe of hot tea – I am staying in bed. 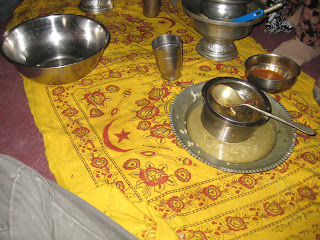 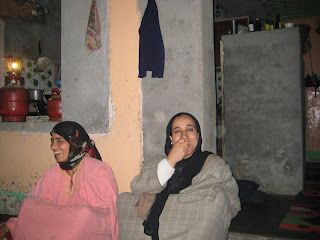